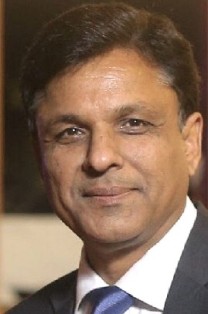 Dr. Pramod Garg, the President of All India Institute of Medical Sciences, Bilaspur, India is currently the Executive Director of Translational Health Science and Technology Institute, Faridabad and a Professor of Gastroenterology and former Associate Dean (Research) at A.I.I.M.S., New Delhi. He is an eminent Gastroenterologist with special interest in Pancreatology. He is a JC Bose fellow and is a fellow of all 3 national science academies i.e. Indian National Science Academy (FNA), Indian Academy of Science (FASc), and National Academy of Science (FNASc), and also National Academy of Medical Sciences (FAMS), and Royal College of Physicians (Glasg). He is on the Scientific Advisory Board of Indian Council of Medical Research and chair/co-chair of science committees of ICMR, Department of Biotechnology, and Department of Science & Technology. As a physician-scientist, he has published >200 articles including several seminal papers in reputed international and national journals such as JAMA, Annals of Internal Medicine, Gastroenterology, and Gut (h-index 48) and edited 5 books. He is the Secretary-General of the ‘International Association of Pancreatology’. He has been bestowed with many awards for excellence in biomedical research notable among others are ‘Om Prakash Bhasin Award’, ‘Basanti Devi Amir Chand Award’ by Indian Council of Medical Research, ‘Hoechst Om Prakash Award’ and ‘Olympus J Mitra award’ by the Indian Society of Gastroenterology, and ‘Paul Webster Oration’ by American Pancreatic Association. He is an editor of the international journal ‘Pancreatology’ and serves on the Editorial board of many other international journals including ‘Gastroenterology’,‘Scientific Reports’ (Nature), Gastrointestinal Endoscopy’, and ‘Journal of Gastroenterology and Hepatology’. He has been invited by prestigious international societies including American, European, Japanese, Korean and Chinese scientific organizations to deliver lectures/talks in international conferences.